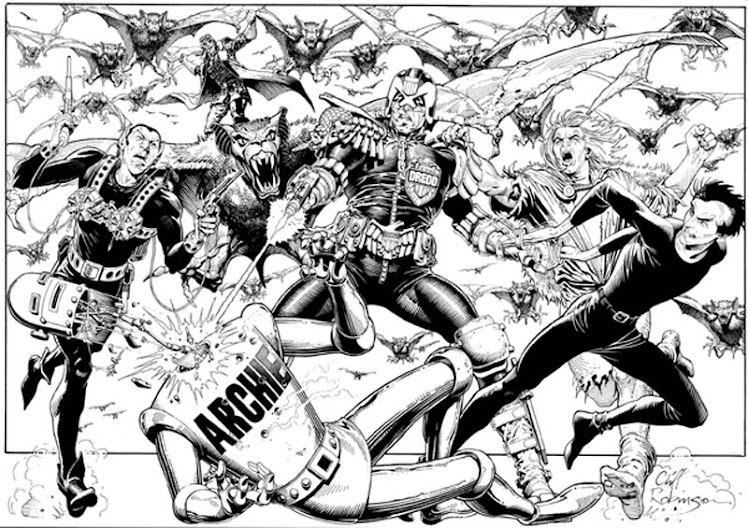 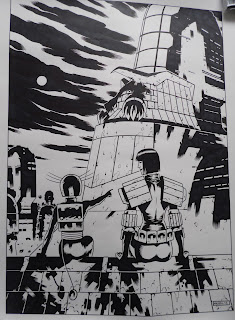 VERY happy to see Colin here!
Four years ago, when i first had the notion of this here project, i straight away came up with a wish list of artists i'd love to see take part, with Colin being high up on that list. So i contacted the fella and asked if he'd be up for it and, happily, he said yes just as soon as he had a gap in his schedule and who did i have in mind for the characters?
Even back then four years ago, i figured there'd be a real shortage of female characters in this collection, so i asked him for Hershey for the modern one as i love his take on her: 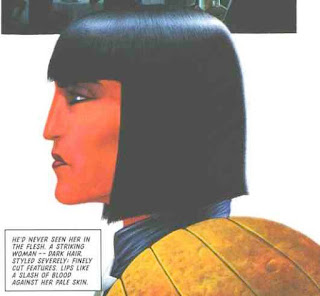 And for the classic character, i went with Billy the Cat as (A) i loved the character as a nipper, (B) i thought Colin's style would work well with him (this pic courtesy of the Beano annual 1972, an annual i still have mainly becuase of Billy): 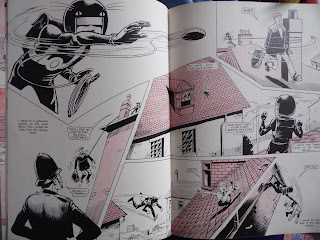 Colin jumped on the idea of drawing Billy as he too had been a fan when small, but hadn't thought of him in years so relished the idea, but i'd have to wait until he had a gap in his schedule.
That was four years ago and its been a sort of twice-yearly tradition to contact Colin to see if he was still up for it. He was each time but was still busy each time - and there's nothing wrong with that, the guys a stellar talent and deserves to be in demand - and would i mind still waiting?
Of course i was, and that's how its been until about two weeks ago when Colin contacts me to say he had a gap in his schedule, did i still want it, and still with those characters?
Of course it was a yes so the project was a go!
Colin said he'd have a think about the composition (remember, apart from the two characters, its totally up to the artist as to what they'd be doing) and a few days later, this prelim came through: 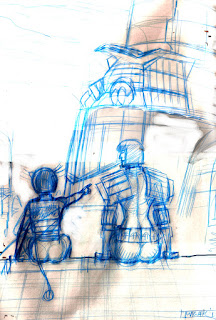 Along with the prelim, Colin also gave his very eloquent reasoning for it:
"It was really quite tough to come up with a idea for this. ... well, an idea that actually meant something other than just a pic of the two of them together.
I got to thinking about Hershey and how idealistic she was earlier in her career, in regard to the law, justice, integrity. She's had to make some really tough choices over the years, some of which her younger idealistic self would hate herself for.
I also got to thinking about Billy the Cat and his ideals of law, justice and integrity. He was from a much simpler time where the baddies were easier to spot. He was from a time when the law and those who uphold the law meant something, something for good. In Hershey's world "good" and "bad" are much more ambiguous. Much harder to tell apart.
Yeah, Billy is a vigilante, especially from say Dredd's perspective, but I reckon he could represent a younger Hershey's idealist heart. Catching the "bad guy", upholding the law, doing good, that sort of thing. In a sense a Peter Pan in Hershey's psyche.
So,... We have a meeting of Hershey and Billy, sitting on a roof looking out over MC1 at the Grand Hall of Justice. The roof they sit on is from Billy's time, an old fashioned slate roof. Billy points toward the Hall of Justice, the city, a marvel of the future from his perspective. Hershey sits there, like Wendy next to Peter, looking at Billy.
She smiles as looks at the idealistic child that she used to be and remembers what it is to hope for a better world. ..... Or something like that. :)"

A brilliant idea, one much beteer than anything i could've thought of, so it was a nod for that too and off Colin wnet with his inks.
And it arrived safe and sound yesterday i'm VERY happy to say!
Love everything about it, love how Colin has nailed Billy, even down to the rope thingy for a tail: 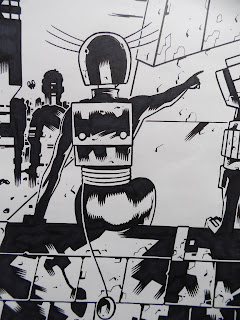 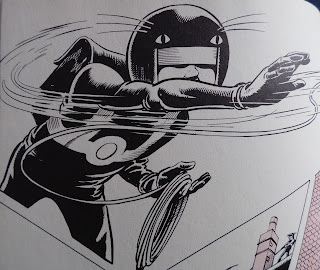 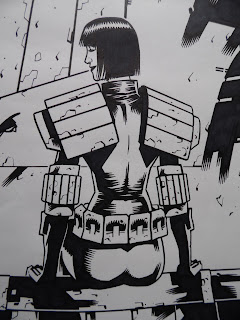 and a Northern slate roof amongst all the Hi-Tech of Mega City 1: 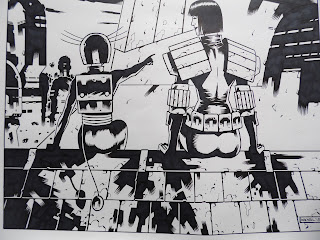 Love it all. And didn't mind the wait at all!
Posted by Mangamax at 00:49 No comments:

Real sneaky peek of the prelim for the next "Someone Old, Someone New" piece, which should be here this time next week - can't wait! 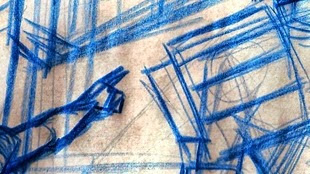 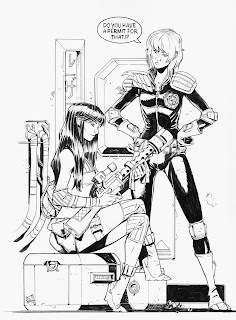 I've been a fan of Chris' work since i bought the stunning "Porcelain" graphic novel, a terrific tale and i'm SO looking forward its sequel. The new ongoing "Butterfly Gate" is very much recommended too: 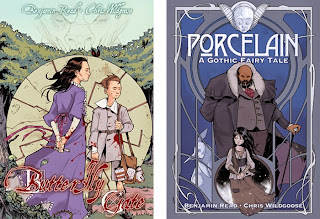 As well as being a terrific artist and excellent draughtsman, i'm also always taken at how brilliant Chris is at drawing women, not having to go the cliche, pouting, baps out route to make a character distinctive: 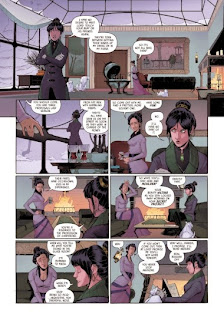 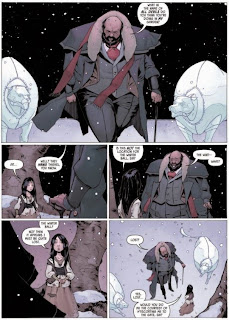 I'd already had the fella pegged for contributing to this here project and thought he'd be a natural for a two female matching, something i've thought is needed after all the macho-ness as what we've seen so far.
But what females?
Well, i've gone with Anderson for the modern as she's still pretty regularly in print 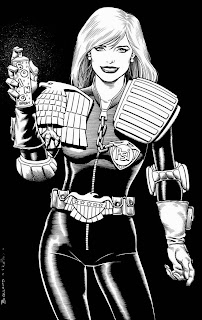 And, looking for a strong, independant female to match her, i've gone for Mysta Mistralis, the Laser Eraser who, along with partner Axel Pressbutton, have been crimingly over-looked when talking reprints, graphic novels and merchandise. Lets have some now! 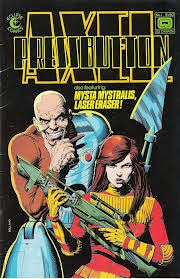 As usual with these projects, the thrill of it is seeing the completed piece and that was true here as Chris never sent me any premlims or thumbnails.
Stunned and amazed by what i was presented with a couple of days ago - he's nailed both characters perfectly (even down to the padding of Mysta's clothing), in a brilliant moment and, as my wife said when i showed her it, "that's how you draw women".
Posted by Mangamax at 01:21 No comments:

So to speak.
Yep, a bunch of the proverbials are rolling as i type and hopefully there'll be new treats to share with you before long, both here and over on my "Batman 186" project (link to it is on the sidebar to the right) and i'm really looking forward to that.
As a taster, a wee glimpse from a prelim of one of the new pieces and, as i'm sure you can tell from the ear, its for Batman 186 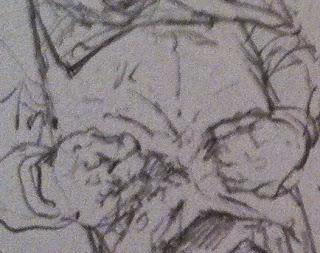 Posted by Mangamax at 13:11 No comments:

Shakara vs Biogs by Conor Boyle 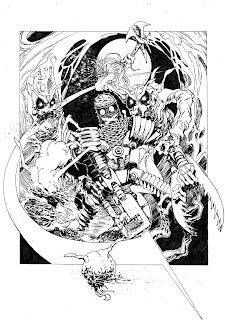 Right from the start of this project, i wanted Shakara to be one of the "new" characters. Okay, that was quite a while back now and there's been no tale of the fella for a long while, but i still wanted him in there. And, being an adversary of all manner of alien races, there was only one type that i wanted for the "old" - the Biogs from way back in Prog 1 of 2000AD and the relaunch of Dan Dare.
I've waffled on long-time over on my "AIEEEE!" Blog about my love for Massimo's incredible creations, so i won't repeat myself here.
Top choice for the project was Shakara's co-creator himself, Henry Flint. But Henry doesn't take on commissions, so i thought the scene would remain an idea and no more.
But then i met Conor Boyle at a Demoncon in Maidstone (scroll down the page here for more of what Conor produced for me that day) and i was blown away by his talent and his incredible fine detail work. And that was just for his sketches.
When i saw what he did for comics and commissions, i knew i'd found a perfect artist for the job.
Happily, Conor was up for the gig, once he'd got some other pieces done and it wasn't long before we were discussing first basic composistions, of which there were four: 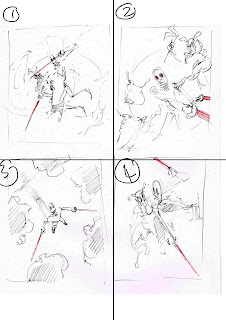 and then slight tweaks here and there until he arrived at what you see here today. I'm SO pleased with this its untrue - he's nailed Shakara perfectly and he's done something that i didn't ask him to do, which is something i loved that the Biogs did in the Dan Dare strip sometimes -frown over those massive eyes they have, giving them a real sinister appearance. Top Bloke that Conor - friendly, polite and very, very talented.
Ta ever so Conor!

Posted by Mangamax at 03:55 No comments:

Old One Eye vs Gorehead by James McKay

Was SO thrilled to hear that Flesh was coming back. Not only coming back, but it'd be a direct sequel to my 2nd favourite strip when 2000AD first started. It'll have Trans Time! It'll have cowboys! It'll have outlandish dinosaur gore! And, hopefully, great looking dinosaurs too. Happily, James really delivered on that front and, as soon as i read the first episode, i got in touch with the fella to see if he'd take part in this here project. Straight away i knew what i wanted: The now totally inaccurate, standing bolt upright, portly, big-headed Old One Eye: 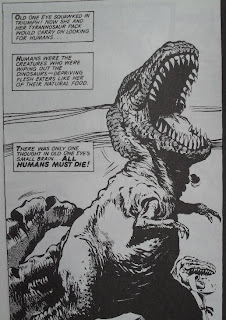 Going up against the totally accurate, brilliantly realised Gorehead: 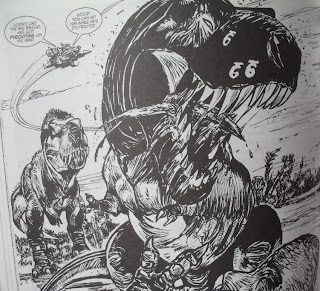 James was up for it alright, but work pressures has meant its taken until now to see just what would happen when the two meet. Fantastic isn't it? But, who's going to win? Ta ever so James for doing this! 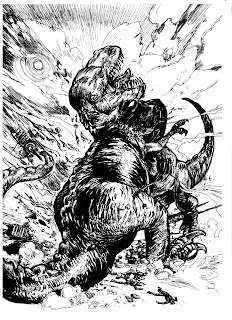 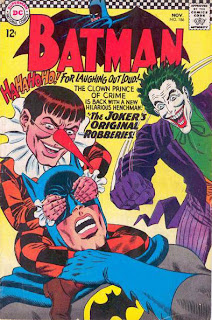 An idea i had long before this project was to do with this Bat-cover. Its my Number 1 image from my childhood Bat-reading, an image that's stayed with me all these years and, even now, looking at it i get a deep down, emotional reaction to it. So, i thought it'd be nice to ask artists to have a go at their own version of it. As long as the three characters were there and were doing what they're doing, how they went about it and what it'd look like is totally up to them. Very pleased to say that i've my first two now. If you care to pop over to my Bat-Blog, you'll see them in all their glory: http://outofthebatcave.blogspot.co.uk/
Posted by Mangamax at 03:44 No comments:

Email ThisBlogThis!Share to TwitterShare to FacebookShare to Pinterest
Older Posts Home
Subscribe to: Posts (Atom)
The brief is simple: ask an artist to depict a chosen classic, long out of print British comic character meeting a modern, in print one. Whether they get along and what they're doing is entirely up to the artist - part of the fun of it seeing just what they'll come up with. The only stipulation anyone is given is that it must be black and white, the natural enviroment of the 70's, apart from that its all down to them.
Another feature here will also be a showcase for my slowly growing collection of commissions of Black Max, my favourite ever British comic character.
And convention sketches of those classic 60/70's strips i love so much.

Mangamax
Born '62, growing old but not up. Ex-Projectionist. Fan of decent film, especially 50's SF, Universal and Hammer horrors, the shorts of Laurel & Hardy. Love the British boys comics i grew up on, special effects in any form, history, mythology, fantasy and cheese.